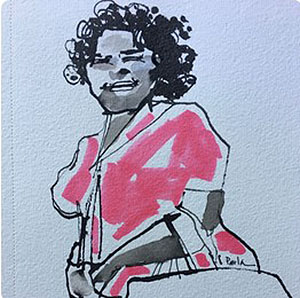 Fleeing a lynch mob in Arkansas; a new life in
Los Angeles; eight children and a giving hand. Unimpeachable integrity.

One afternoon early in 2020, I driving home, listening to KQED (our much loved public radio station here in San Francisco) and I happened to catch the beginning of a fascinating interview. Scott Shafer and Marisa Lagos were on the phone with a state Assembly member of California Assembly District 79 named Shirley Weber. Weber’s voice was strong, her words well chosen, her views as sensible as the day is long.

When I got home, I sat in the garage and kept listening, rapt. Wow. Who is this?

Such was my lucky introduction to Shirley Weber, Ph.D., a retired San Diego State University professor who is now a Democratic assemblywoman and the head of California’s Legislative Black Caucus.

On Tuesday, Gov. Gavin Newsom nominated Dr. Weber to succeed Alex Padilla as secretary of state. “Dr. Weber is a tireless advocate and change agent with unimpeachable integrity,” he said.

There was one person who didn’t come up in that KQED interview: Dr. Weber’s mother.  A woman like this must have had a pretty great mother, I thought.

I called Dr. Weber’s aide, Joe Kocurek, and asked him whether Dr. Weber had indeed had a mother she cherished. Yes she did, was his response. And Dr. Weber would be more than happy to talk with me about her mother,  Mildred Nash.

My conversation with Dr. Weber was my second interview for the podcast. It would be putting it charitably to say I was still feeling my way around podcast production. The quality of our Zencastr recording  was terrible (entirely my fault, for the record),  and Dr. Weber, newly stuck at home thanks to the pandemic, very kindly made a backup recording for me on her phone.

It was an interview I’ll never forget. Here I was, a total stranger, asking her about things from her childhood that she might long since have shelved.  But she was eager to honor the woman who raised her. Each memory she called forth seemed to spark a new one. She told me about her mother’s childhood in Arkansas, where she was raised by her grandmother; her mother’s math skills; her sweet potato cobbler; the ride on the segregated train when the family moved to Los Angeles in the early 1950s.

The family settled in the projects of South LA and Shirley’s mother, Mildred, worked hard as a homemaker raising her eight children. Dr. Weber told me about her mother’s superhuman efforts as a mother and homemaker. (“By the time we got out of bed in the morning, my mother had already washed a load of clothes and most had them hanging on the line.”)

Mildred Nash was so beloved in the community that when she died in 1977, the church was packed with mourners, and the flowers at the cemetery were stacked six feet high. To this day, people who know the Nash children — and their children — talk about Mildred Nash.

She lived to see her daughter Shirley receive her Ph.D. from U.C.L.A. She didn’t get to see her daughter’s rise to prominence in the California State Assembly. She didn’t live to see Dr. Weber, as chair of the Legislative Black Caucus, create a law to study proposals for reparations to descendants of enslaved people. And she didn’t get to see her daughter preside over the counting of the Electoral College votes, a count that would put Joe Biden and Kamala Harris over the top in the 2020 presidential election. The count was covered in full on C-Span, and inspired a Q&A with The New York Times,  in which Dr Weber talked about the electoral college, and voting rights.

On the day of the vote count, Dr. Weber’s outfit, a rich dark pink, put me in mind of the color her mother wore at Dr. Weber’s Ph.D. ceremony at U.C.L.A. in 1976. The photograph from that ceremony served as the basis for Paula Mangin’s drawing, which accompanies the podcast.

Mildred Nash would have turned 100 this year.

(12-22-20) Congratulations to Shirley Weber for her nomination by Governor Gavin Newsom as the next Secretary of State of California.