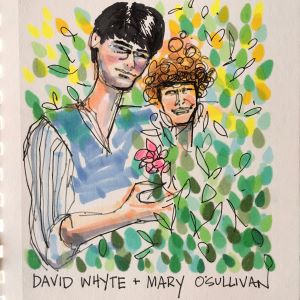 David Whyte's Farewell Letter is a balm for the soul

In this strangest of holiday seasons, when so many of us are missing our extra limb of extended family, I’m not sure it’s really just cheer we could use. As we turn this final page on our dark 2020, we might need something that transports us in a different way. The wisdom of the poet and philosopher David Whyte, especially when it comes to the wonderful relationship he had with his mother, Mary O’Sullivan, might be just what the doctor ordered.

Whyte has said that what he does for a living is ruminate on “the conversational nature of reality.”  For more than three decades, he’s been bringing his poetry and philosophy to audiences of all stripes, pinstripes included. He has read Rainer Maria Rilke’s poem The Swan – in its original German – and Emily Dickinson’s I dwell in possibility to corporate managers, and watched their bewilderment turn to understanding. In fact, Whyte has worked with companies around the world with the goal of making business leaders see that they are more likely to reach their full potential if they can find the poetry in their work lives.

I began reading David Whyte’s poetry nearly 20 years ago, when a friend gave me a two-volume boxed set. In that set I found the immaculately crafted poem The Well of Grief, which came to inhabit my interior landscape — and my purse, where I’ve kept a copy folded and tucked for many years.

I got in touch with David about coming on to Our Mothers Ourselves after I heard him tell a heartbreaking story about his mother during his popular Sunday Series. Thomas Crocker, Whyte’s very kind right-hand person, got back to me and said that David’s schedule was hectic, but there was something about the invitation that spoke to him. That’s the way things tend to happen with this podcast: People find themselves wanting, needing, yearning to talk about the woman who saw them through so much of life.

Over the past decade or so, I’ve been asking people to choose just one word to describe their mother, and when I asked this of Whyte, he said it was something he hadn’t thought about before – finding the one word that best sums up Mary O’Sullivan. He chose the word “lyrical,” because, he said, his mother was “joyously articulate,” “a great singer,” and lyrical in her use of words to convey love and affection.

Turning the tables just a bit, I asked a few friends, whom I know to be fans of Whyte’s poetry, for the word they would use to describe David Whyte. A sampling of the responses: Insightful. Profound. Deep. Wise. Genius. Spiritual. Inspirational. Accessible. Surprising. Mystic. Storyteller.

My own word for Whyte: Bountiful. Everything he writes, even words wrought in sparest form, is a generous helping for the mind and for the soul.  When Whyte arrives, poetry in hand, the gift he brings is as precious as the most exquisite mother-of-pearl box. And long after its bearer has taken leave, the poetry stays. Phrases like ‘Perfection is a fragile, ice-thin ground that barely holds our human weight’ linger like an afterimage.

One David Whyte poem that is new to me is Farewell Letter, about a letter he imagined his mother might have written to him after her death. Mary O’Sullivan became her son’s own lyrical bridge between two worlds.

In our interview, Whyte talks about the interrupted dream that gave rise to the poem.

Whyte’s verse is balm for many a broken soul. Who wouldn’t want to read a poem titled Everything is Waiting for You? (Incidentally, the volume in which the poem appears, of the same title, is dedicated to none other than the lyrical Mary O’Sullivan.) So here’s to hoping that my conversation with David about his mother and their elemental bond will feed your mind, raise your spirits and fill your soul. I know it lifted my own heart beyond measure.

* You can find David Whyte’s word for his mother — and those of a thousand other offspring who have contributed their one word — just around the corner, on the word cloud page. Please visit and contribute your own.

A special thanks to Thomas Crocker at Many Rivers Press for permission to use David’s poetry, and to the late Bridie Gallagher for her beautiful rendition of A Mother’s Love’s a Blessing.

This episode is dedicated to the late poet (and editor non pareil), David Corcoran.  We miss you, David.

Our Mothers Ourselves is a production of Odradek Studios in San Francisco.