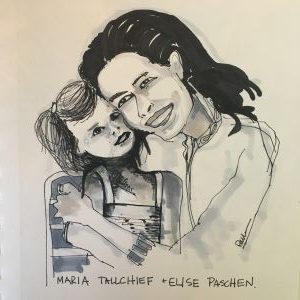 Elise Paschen speaks about her mother: A Prima Ballerina whose legacy looms so large she inspired a Google Doodle

This week’s episode has been percolating for months.

When I wrote to her daughter, the Chicago-based poet Elise Paschen, Elise wrote back right away to say she was interested but busy, and could I get back in touch with her in a couple of months.

A couple of months later, I wrote again. This time, her calendar less packed,  Elise was eager to tell me that her mother, whose technical brilliance as America’s first prima ballerina was captured on film only occasionally, had just been honored in a Google Doodle. The Doodle was created in collaboration with American Indian guest artists. One,  Lydia Cheshewalla,  is, as Tallchief was, a citizen of the Osage Nation.  Cheshewalla told an interviewer she’s admired Tallchief since childhood. Creating the artwork, she said, felt like she was coming full circle.

When Elise Paschen speaks about her mother, her tone is one of quiet reverence, with a hint of  the “we-had-something-special” vibe I detect in the voice of many people I interview.  Elise has written several poems about her mother. They’re rich with imagery of her mother’s dancing. The poem Eurydice, about her mother’s performance in Orpheus, set to the music of Igor Stravinsky, ends with this:

Mother, when I was young, I watched

you from the wings and saw the sweat

dripping from your arms and neck, your gasp

for breath. I thought it was your last.

But no. You’d towel off, and then

step back into the sunlight, smiling.

To prepare for our conversation,  Elise suggested I read her mother’s 1997 autobiography, Maria Tallchief: America’s Prima Ballerina, written with Larry Kaplan.  I promptly borrowed the book from the Internet Archive, and couldn’t put it down. It’s a book as humble as it is awe-inspiring.

And in the Department of Odd Coincidences, there’s this: For years, every time I’ve moved (and I’ve moved a lot), I’ve taken with me a much loved  book I own, titled Poetry Speaks. I bought it for the written poems, but also for the  three CD’s it came with, filled with spoken poetry. For years I kept the discs in my car and listened to those CD’s while driving, soothed by verse read by the poets themselves:  Walt Whitman, T.S. Eliot; Dorothy Parker;  Langston Hughes, Allen Ginsberg,  Sylvia Plath. At some point after Spotify had taken charge of  my listening  habits,  I lost the poetry CD’s.

But the book remains in my possession. And I keep it close at hand on the bookshelf next to my desk. Occasionally, I take it down, open it, and read whatever poem I happen upon.

On the  morning  Elise and I were set to talk, I glanced at the shelf, and my eyes lingered  just long enough on Poetry Speaks to take in the names of the volume’s editors: Elise Paschen. How strange that I’d never bothered to read the name. Yet now, how fitting. And thirty minutes later, there she was, reading poetry — her own, about her extraordinary mother — straight into my ear.  A full circle indeed.

Elise Paschen’s word to describe her mother: Passionate. Please contribute the word that best describes your mother to the Our Mothers Ourselves Word Cloud.

Our theme song, Tell Me Mama, is composed and performed by Andrea Perry.  Paula Mangin is our artist-in-residence. Alice Hudson is the show’s producer, and Sophie McNulty did this week’s social media.